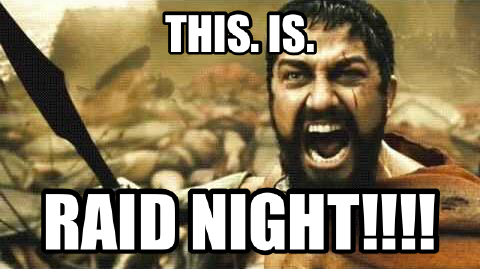 This is our new Raid Boss Scenario series, where we take existing Colossal/high point figures, alter a few things about them and then create Single and/or Multi-Player Raid scenarios based around that piece!

So first, a definition. If you’ve been playing Heroclix for awhile, you probably have a general understanding of most of these terms, as they’ve been around for a long time (although exact terminology may vary by LGS). 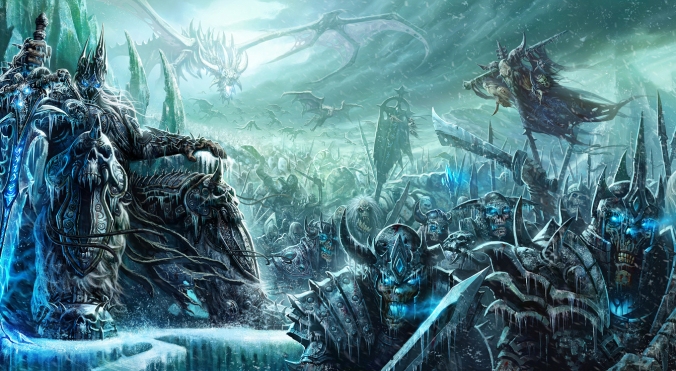 We’re trying to do the Heroclix version of this, essentially.

By now, Heroclix has a long and storied tradition of making some great high-point figures. However, some of them aren’t quite Boss material unless you tweak a few things about the figure. Luckily, Heroclix is a versatile game! It’s very nature allows you to create almost any Scenario you can imagine for house games!

(Ninwashui and I have tried this a couple times, and we had a lot of fun. So as we try out a few more “Bosses,” we’ll report back any alterations we attempt that seem to work.)

Up first for the “Boss” treatment is… 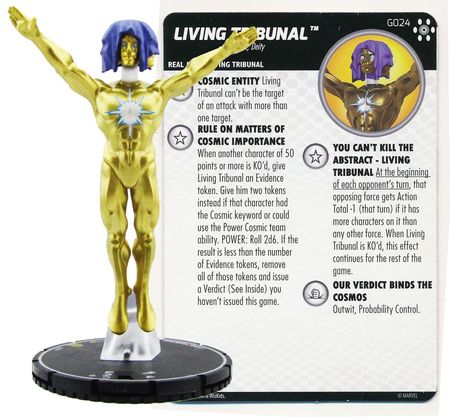 Living Tribunal is 900 points and he is pretty much the master of all of the Marvel multiverses. His dial is great, and really does lend itself to a fun Boss fight. However, I can tell you from experience that if you’re going to Pilot him in a Boss fight, his Traits need a few upgrades.

[EDITOR’S NOTE: Now is as good a time as any to mention that in running any Raid Scenario, any tweaks you make should never affect anything that’s actually PRINTED on the Boss’s dial–essentially, don’t try to give him new stats or standard/Special abilities. It just gets too confusing.]

Right! Any “edits” we’re making to a Boss are made by adding/removing Traits, which is what we’re going to do here.

(I usually just make a note on my phone or write down the revisions on a piece of paper.)

For example, on Living Tribunal, the “Cosmic Entity” Trait is, essentially, worthless for a Boss (he’s a solo piece in this Raid Scenario, so he would never be a target of a Multi-Attack).

Instead, we’re going to replace “Cosmic Entity” with a new Trait of our own design:

“Judge of All Realities: FREE: Choose a Team Ability. Opposing Characters can’t use the chosen Team Ability until your next turn.”

Also, for Raid encounters, we suggest setting the Action Total cap at 5. In this instance, that would actually reduce down to four for the raiders due to the Boss’s “You Can’t Kill the Abstract–Living Tribunal” Trait (but could be increased back up to a max of 5 with Leadership, etc.).

That was all Ninwashui and I did for our Living Tribunal Raid! We ended up going 1-1 against each other, but each game was a lot of fun!

I’ve heard of other folks running similar games deciding to put a minimum point threshold for each character (so you don’t end up with literally 30 pieces on the board); Ninwashui and I didn’t feel the need to do this (he was playing mostly 90-200 point pieces anyway while I played the Living Tribunal), but your mileage may vary.

This is what “downing the Boss” looks like in this Scenario…

Finally, once the Raiders have “farmed” out the raid encounter, you can always spice it up with a “Heroic Mode.” In this case, “Living Tribunal–Heroic Mode” would consist of all of the above new rules, plus one more Trait:

“Simultaneous Multi-versal Manifestion: Living Tribunal can use the Multi-Attack ability.”

So far, Raid Night has been a fun way for us to spice up our home games. We’ll run another one of these once we test out a different Boss.

Until then, come see us here tomorrow night for more Clix-Mas shenanigans!