[EDITOR’S NOTE: Welcome to Clix-Mas 2018, wherein we here at Critical Missives rather foolishly try to provide you with twelve different articles in twelve days, all brought to you by either the Ghost of Christmas Past, the Ghost of Christmas Present, or the Ghost of Christmas Future! If you need to catch up with our intro to all of this, the first Night of Clix-Mas 2018 can be found in our first post of the season, and Night 2 speculated on the next Star Trek set. And Night 3 looked at some of HypeFox’s favorite Golden Age pieces! Night 4 dropped yesterday and examined the lack of Fantastic Four in Clix for the last 6 years! Finally, Night 5 brought us a look at HypeFox’s favorite Sealed sets!]

Welcome to Night Six of the Twelve Nights of Clix-Mas!! Sorry we’re a little late tonight, but we got some hot off the presses news!

About a year after I called for Infinity Gem Equipment in my Irresponsible Speculation!! Preview of the Avengers: Infinity expansion… we’ll actually be getting just that!

That’s right–Wizkids announced another Avengers set for next year, and it’s gonna have some big hitters in it, with sub-themes including Wakanda itself, the Illuminati, The Cabal, The Elders of the Universe and possibly even the first Malibu character in Clix, Rune (who himself once went after the gems, which would make him a perfect inclusion here).

There will be 78 total figures in the set broken down thusly:

Obviously we don’t know much more than that, but we can make some educated guesses based upon what we know from the comics! So let’s indulge in some quick…

One of the best Marvel covers of the last 10 years…

Speculation #1: The name of the set will be Avengers: Black Panther and the Illuminati.

Why is this important? Well, first of all, “Avengers Black Panther and the Illuminati” just sounds and looks like a weird run-on sentence. It’s kind of terrible, like someone just reciting stream-of-consciousness-style everything that they remembered from the set as a title. As a title, it means nothing because it COULD mean anything.

Now, Avengers: Black Panther and the Illuminati is a different story! That could have several distinct meanings!

Firstly, during Hickman’s run on New Avengers, the Illuminati took center stage. It basically could have been called Avengers: Illuminati. Currently, Black Panther is also maybe/kinda/sort of trying to reform the Illuminati as a more inclusive organization in his capacity as Avengers chairperson. This storyline may keep developing and even reach a crescendo just before or even during this set’s release in June.

[EDITOR’S NOTE: Or by then Marvel may reboot everything for a tenth time in 5 years as no one is buying their books right now. Or any books really.]

Nice. Way to bring the mood down. 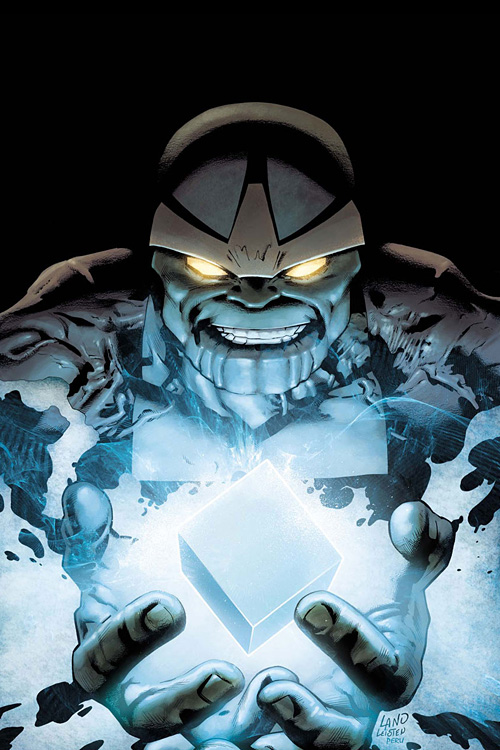 Speculation #2: There’s 11 Equipment, and we may already know what 8 of them are…

Why is this important? They’ve already told us that the Cosmic Cube is being remade. That’s 1. The Infinity Gems are in this set (see next entry for what else this may tell us). That’s six more pieces right there, folks! They’re not going to make all the gems one collective piece of equipment, right? Especially since the other piece of equipment in the set they told us about is The Infinity Gauntlet!

So that means there’s just 3 unknown pieces of equipment out there! And we have six months to guess what they are!

Speculation #3: The Illuminati members from Hickman’s New Avengers run will be the Gem-bearers in this set (ie they will be the figures that the gems come with).

Why is this important? Because if my guess is correct, it tells us a lot about the roster for this set. That would mean new versions of Iron Man (w/ the Reality Gem), either Professor X or Beast (w/ the Mind Gem–in between the distribution of the gems and the start of the incursions, Professor X was murdered by Cyclops or something in AvX–I honestly could be conflating stories, here, but it’s not really that important), Namor (w/ the Time Gem), Black Bolt (w/ the Space Gem), Doctor Strange (w/ the Soul Gem) and… someone(?) with the Power Gem?

[AUTHOR’S NOTE: Honestly, the color assignment for the gems has been all screwed up ever since the MCU started, so I don’t always remember which was which when I’m reading the comics now. I’m pretty sure about the Soul, Reality and Mind; after that, I can never remember.]

See, that’s where the theory falls apart. Because in the comics, Reed Richards has the Power Gem at that point. And even though Disney’s acquisition of Fox should be finished by that point, it’s unclear (at best) whether Marvel will let Wizkids make any FF pieces by then (my best guess is no). Sooooo…

Okay, the Stranger is not an Elder of the Universe, but I don’t have time to look up other art for them.

Why is this important? It’s really not. But in this Scenario, Wizkids will just make new versions of the Elders of the Universe (from whom Thanos stole the gems in the first place) and have THEM come with their respective gems. Plus we’re also getting… uh… Astromancer? No, Astronomer! That’s it!

[EDITOR’S NOTE: Yeah, we’re HUGE Marvel Cosmic fans, and even we forgot this guy existed. But hey, in this Scenario, we’d get a new… Runner. Guy. Dude. Yaaay! Oh, $#!t, we might even get another Gardener! Actually… I’d potentially be excited for another Champion!]

Why is this important? Look, I’m not trying to worry anyone here who is huge fan of the Infinity Gems (like myself) and wants Wizkids to make them accessible, but whether it’s the Illuminati that comes with the Gems or the Elders of the Universe, I mean… there’s six Gems… and six Chase slots…

You do the math.

Speculation #6: Who is the Ultra-Chase?

Why is this important? History says it probably isn’t, as the previous two Ultra-Chases–while very powerful for their points–didn’t make a huge Meta impact. But with Black Panther wielding the Gauntlet during Secret Wars having already been Clix’d, I can think of a few possibilities:

–Captain America wielding the Infinity Gauntlet given to him by the Illuminati in New Avengers #’s 2-3 (or thereabouts).

–God Emperor Doom (also from Secret Wars–but this would be contingent on FF characters being available, which again seems unlikely)

–The aforementioned Rune, who, even as a Malibu character (Malibu comics was the independent publisher behind the Ultraverse, a pretty cool superhero universe that eventually ran out of money and was bought by Marvel in or about the late 90’s/early 2000’s) once held the Gauntlet for a brief moment before the Silver Surfer used the Power Cosmic to literally dismember Rune’s hand (as I recall–I could be misremembering something).

Rune was basically an evil space vampire who already had cosmically powered gems around his neck (the Star Stones–hey, maybe those are another piece of equipment in the set!), so of course he had to try and get a whole new set.

Look, it makes sense (kind of). He’s probably going to be the only Ultraverse character in the set, since the Ultraverse isn’t a listed sub-theme. I know Rune isn’t a popular or well-known character, but neither was the White Rabbit.

Okay, that’s it for tonight! Sorry we were a little late, but we’ll see you again tomorrow for more 12 Nights of Clix-Mas!!

One thought on “The Ghost of Christmas Future Presents: Breaking News! Avengers: Black Panther and the Illuminati!! (Or, The Sixth Night of Clix-Mas 2018!!)”