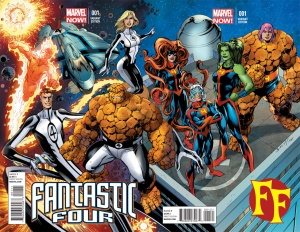 5.  FFFF050 H.E.R.B.I.E. (30 Points) – There is one reason to use this guy and that’s if sidekicks really catch on as a thing. In the future foundation set alone I can’t imagine a really good sidekicks team. But with the Wonder Woman 80th anniversary set coming out this week, this guy could start to see competitive play if we start seeing teams with several characters that generate side kicks. He’ll break theme on those teams, but being able the prevent the death of a sidekick 50% of the time is worth it.

4. FFFF009 Thing Robot (20 points) – This guy in multiples is great with sidekicks, but even without them he’s worth playing. For 20 points he is the hardiest figure you can find at that point level and as a bonus he can attack for 4 damage if the opponent tries to ignore him.

3. FFFF006 She-Hulk (75 points) – There is only one thing to point out here that isn’t really obvious. On the surface she is just a tough figure with a long dial full of reducers for a relatively low point cost. But, she does have one trait that may catch an opponent by surprise. Its states, “THE FANTASTIC FOUR FOR FOUR MINUTES: Once per turn, you may reroll an attack roll that has a 4.” I did the math and that’s roughly 31% of all rolls AND it doesn’t mention anything about needing range or line of fire. So that’s actually a really strong trait that you might underestimate until you stop and think about it.

2. FFFF031BV Wizard (25 points) – When you absolutely positively need to SEE everybody in the room, accept no substitutes. So this is a subtle but powerful piece that can grant improved targeting to any friendly piece near them. If you are running one (or several) good ranged attackers that you want to make sure aren’t thwarted by something like stealth, this is your guy.

1. FFFF013BMad Thinker (40 points) – If you are playing a Robot theme, then you need to run this guy. He brings perplex, probability control for robots anywhere on the board, and as a nice bonus he is incredibly hard to kill considering he is only a tiny fraction of your build total. And if you aren’t running robots then spend your points elsewhere.

10. FFFF048 Stardust (100 points) – One part Silver Surfer and on part Wolverine. This guy has only has 6 range and 3 damage value for his entire dial, but the pulse wave at the front and back of his dial really help negate that weakness. What really makes him special is his defense. His damage reducers and cosmic TA combine really nicely with his trait, “A BEING OF PURE ENERGY: At the beginning of your turn, you may heal Stardust 1 click. // The first time Stardust would be KO’d instead turn her to click #7. Protected: Pulse Wave.”

9.  FFFF054 Silver Savage (100 points) – An exceptional close combat attacker that towards the end of his dial becomes a great ranged attacker with Hypersonic Speed. His biggest weakness is his starting Battle Fury that keeps him from being carried into battle. He’s also a figure that has a really good comic accurate/coolness factor.

8.  FFFF040 Human Torch (75 point) – This is the most effective Human Torch dial that they’ve ever printed. Usually the Human Torch is represented by a combination of energy explosion, running shot and energy shield/deflection and he tends to get KOed quickly whenever attention is focused on him. This Human Torch changes it up by featuring mastermind and toughness on defense to go along with a special Pulse Wave and knockback on offense. Normally Pulse Wave and Mastermind together is not ideal, but this time it works because this version of Pulse Wave does not target friendly characters.

7. FFFF059AV High Evolutionary (30 points) – Simply an exception efficient ranged attacker that features running shot, psychic blast, probability control, the cosmic energy TA, and a stop click. He’s expensive, but if that wasn’t a factor running multiples of him with a prime wizard would be a brutally effective team.

5. FFF058 Puppet Master (40 points) – A  40 point character that has mind control with a 10 range that is capable of ignoring all terrain for targeting. That combines well with his excellent 12 attack and precision strike that helps to mitigate super senses. The really surprising part is how good his defense is. He has starting stealth, super senses, and shape change. Such good offense and defense at 40 a point cost is nuts.

4. FFFF055 Uatu (30 points) – Definitely my favorite mission point character of the set. If winning by mission points becomes a thing when Wonder Woman releases, he could see a lot of play. For 30 points he’s a great support character with long range probability control that is relatively tough to KO. And if your opponent chooses to attack him (or you mastermind damage to him) then he goes from defense to offense. His last click has a 12 attack and 4 damage that pairs nicely with his 12 range.

3. FFFF065V Dr. Doom the Sorcerer Supreme (75 points) – If you are running one Dr. Doom chase you are basically running them all and this is the chase that a lot of people run as their default go-to piece. What makes him so valuable is his damage special that states, “CHANGE THE FATES: Once per attack, you may reroll the attack roll of a character within range and line of fire.” That’s not once per turn like regular probability control, that’s once per attack. That’s an insane of amount of board control and your opponent faces a massive uphill battle if he tries to attack through that advantage.

2. FFFF044V Molecule Man (30 points) – This is probably the best barrier figure ever printed. If he wasn’t unique, you’d see swarms of him at tournaments and games would be ending in roll offs all the time because no one would ever be able to make any attacks. In addition to normal barrier he has a special barrier that states, “MOLECULAR MANIPULATION: Smoke Cloud as FREE. // FREE: Roll a d6 and choose a number of non-debris terrain markers within range up to the result. Replace those markers with any combination of hindering, water, or blocking terrain markers. At the beginning of your next turn, remove all markers placed this way.” That translates into him being able to create an average of 3.5 blocking terrain markers a turn as a free action. Basically a free use of the full barrier power each turn in addition to being able to use barrier normally. That’s crazy.

1. FFFF062V Dr. Doom (75 points) – The reason everyone wants him is his trait that says “I WANT THAT TREASURE!: FREE: Once per game, remove a FFFF #s010 Time Platform equipped to Dr. Doom from the game. If you do, equip Dr. Doom with an equipment of 10 points or less on an opponent’s force (on the map or equipped to one of their characters).” So basically you’re opponents best equipment suddenly becomes your best equipment and your opponent is out of luck. Even if it’s something they were depending on. Radioactive clay? It’s yours. Power Gem? That’s Doom’s Power Gem? Carnage Symbiote? Doom is the new Carnage. In a meta ruled by awesome equipment, that makes him the best character in this set.