“Well he don’t know talkin’ good like me and you, so his vocabulistics is limited to ‘I’ and ‘am’ and ‘Groot,’ exclusively in that order.”

So I am in the unusual position of HypeFox having given his Top Ten Set List first. The last time we did a top ten was for Deadpool. I went first that time and the process created the most popular article our site has ever published. I think HypeFox is feeling the pressure this time because this is my…

Some General Notes About the Set:

“None of us made this list, but damn we look heroic!”

Here’s some things HypeFox was actually right about. He said:

Here’s something he was wrong on: 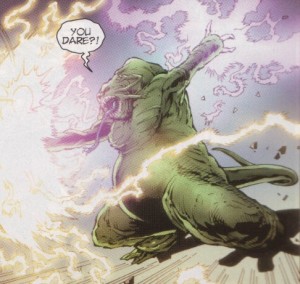 “Yes, I ‘dare.’ Honestly, being the fifth Honorable Mention isn’t that bad, Volx.”

5.  GOTG010B Dire Wraith Queen – She brings Pen/Psy, Perplex, Stealth, Energy Explosion, Toughness, and Prob on her first click. In addition her crazy Traited Shape Change makes her hard for opponents hit. She reminds me a lot of SLOSH042E Helspont, but with less impervious and more stealth. What’s keeping her from being higher on this list? She needs slightly higher stats and the basic Dire Wraiths just aren’t that good. 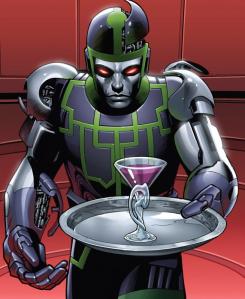 4. GOTG013B Recorder #451 – He’d be decent on his own, but his Trait is the real reason you’ll ever really want to field him. He brings a fun new spin on some pieces that would likely have not seen as much play otherwise. Time to dust off your IIM001A Iron Man! 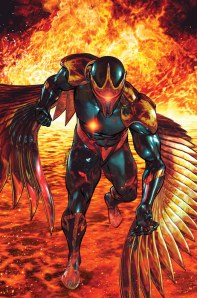 “Don’t touch which button? And what’s a ‘remote detonation’ now?”

3. GOTG008A Raptor – Sporting Stealth, Flight, and Sidestep, these members of the Brotherhood of Raptors make great taxis for the Armor and Shi’ar-keyworded figures of the world. Remember the Shi’ar? WatX wasn’t that long ago, was it? Remember armor teams? IIM, wasn’t it? … You get the idea. 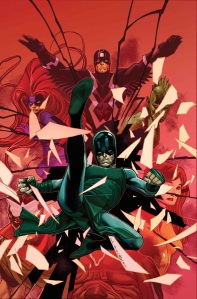 “If do right, no can defense.”

2. GOTG028 Karnak – A solid close combat piece similar to Shang-Chi and Cat. His inhumanity trait is what pushes him over the top. It essentially gives him +1 to attack or +1 to defense that turn depending on your needs that turn. But the real kicker here is his trait and the awesome combo ability it brings. Imagine him with poison from a phoenix shard. Now imagine a penetrating quake from a hammer dropped from the book of shadows!

This sculpt wasn’t creepy enough for Shriek so it was rejected and replaced with the version we have now.

1. GOTG044 Shriek – She would have made my top 10 except that she needs a lantern construct to be really good. Combine her with the sniper rifle and you’ve really got something there. Everything within 10 range gets battle fury. That means that with good positioning your team can’t legally be targeted by a ranged attack all game by 99% of the figures out there. Even Bullseye won’t be able to touch her. Plus she can mind control anyone in 10 range regardless of line of fire. She severely limits what you can play yourself (maximum carnage or close range figures only), but I think she can be the lynchpin of a successful team.

Alright, now that we’re done with the warmup, here are:

He just found out he didn’t make the top ten…

10. GOTG038 Maximus AND GOTG018 Alpha Primitive –  I made these two figures one entry because the effectiveness of both pieces are closely tied to each other. [EDITOR’S NOTE: This seems an awful lot like cheating.]

They are either both effective or both not. I’ve been arguing with HypeFox for a few weeks now about this guy. I think he has a future in tournaments. HypeFox doesn’t. I think everything the Alpha primitives bring to the table make them well worth 30 points. (especially the Mind Control and free move) When you consider that Maximus can create 2 of them and add that 60 points to your force, then it’s really like you get the remainder of the Maximus dial for 15 points. That seems like a great deal to me. 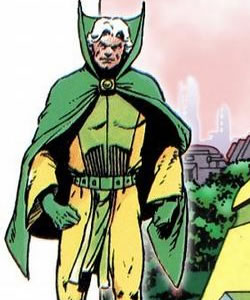 “You know what? Let’s just skip Father’s Day this year. And, y’know, every other year. From now on.”

9. GOTG058 Mentor – Like a buffed up version of SOG038 David Cain – this guy is a sniper instructor just looking for the perfect student. He brings a lot of offense to the table himself, but his real value is transforming a high-range, low-offense character from zero to hero. If you make sure to keep him our your side of the map, he won’t go down easy.

8. GOTG208 Ronan the Accuser – This guy is the perfect sniper. You’d be hard pressed to find this much ranged offense in another character his point level. 9 range, 12 attack, and Pen/Psy make for a deadly character. As a bonus, he’s the glue you need to put together a great Kree team. All the Kree Generics are lacking is will power. This is how they can get it. 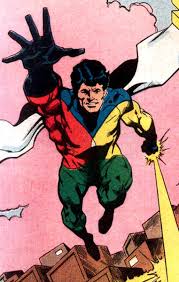 7. GOTG059B Doctor Spectrum – I this guy over GOTG059A Doctor Spectrum because he has a better offensive roll to play and costs less points (Plus Rokk isn’t very good). His Trait will make sure you almost never miss. Energy Explosion with 3 arrows will punish anyone standing next to your target. Just watch out for when your opponent starts shooting back, because his low-ish Defense Value makes him pretty squishy. 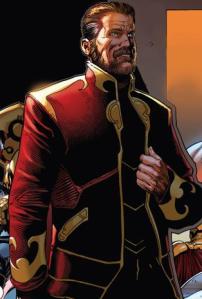 6. GOTG011B Jason of Sparta AND GOTG011A Spartoi Elite – Remember the Shia’r? Wait I said that already. This is another group of figures that you don’t want to play separately. Consider that one Spartoi Elite will give Jason 18 Defense and a Perplex to waste on whatever he wants. 3 will give him 20 Defense and 3 Perplexes to use on offense! Plus thanks to ship he can carry them all around at the same time. That’s 159  points total for that Defense/Perplex ball. In 300 you could throw in WXM023B Cerise and WXM022 Korvus and still have 17 points to share. Alternatively, Jason and a single Spartoi Elite could bring WXM048 Warstar along to pack a serious punch. You could even make a bunch of Raptor and Spartoi Elite pairs. Lots of options here. 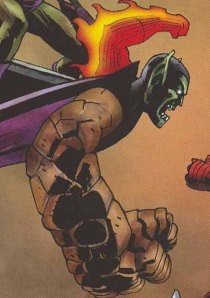 5. GOTG062 Super Skrull – You can look at his dial and wonder why it costs 170 points. What you need to do is imagine that he has a full dial of hypersonic speed, steal energy, and impervious. If I ever play him on my team that’s exactly what he will have. I was a big fan of WXM038 Legion and the Super Skrull brings that idea to a whole new level.

“Ugch. I have got to start washing my hands after using the bathroom!”

4. GOTG003 Mantis – For a mere 56 points she brings Prob, Mind Control usable on friendly Guardians, Combat Reflexes, Close Combat expert and Regeneration for when she’s taken a good hit. She’s a support character that can also handle herself in a fight. I’d love to say I originated the love for this piece, but it’s rated 5 stars on HCrealms and Patrick Yapjoco won the ROC championship with her. Consider me a band wagon fan.

“Hey, Marvel, let’s ease up on the ‘Holocaust’ references, eh? It sounds like your comparing the horrifying ordeal of Jewish POW’s in WWII concentration camps to the plight of FICTIONAL CHARACTERS!”

3. GOTG007B Captain Marvel – A defensive ability only seen before on 175 point Mon-el Prime now comes on an 82 point piece? And it can’t be countered? What the what? On Offense his penetrating damage ranged UNI-BEAM attack can keep any character he’s able to hit from attacking at all on the following turn. This well rounded piece has it all. 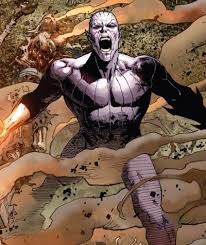 2. GOTG060 Thane – A month ago, Hypefox and I played a game with the Guardians of the Galaxy Movie Starter pieces. He tried to use the starter set Starlord to attack my character once normally and then once with a free action Hadron Enforcer. That seemed way too powerful for me to believe it. We stopped and read Starlord’s card and I was right. If you use the special action Pulse Wave power, then that is your one action with that character this turn. They will never make a character that can do both in one turn, because that would be stupid.

So the next set comes out and we get Thane. Thane can do exactly the trick that Hypefox tried to pull on me last month. He can attack and then once per game do a free action Pulse Wave in the same turn! That’s potentially 9 clicks of damage to a single target in a single turn and all of it would bypass Impervious! Even discounting his Trait, his dial is very tough and deadly. 3 clicks of Invincible up front for only 115 points? That’s almost enough to be the best character in the set.

1. GOTG050 Proxima Midnight – This is the best character in the set. For only 100 points you get a long 7 click dial and every click of it is deadly. Her Defense of 18 plus Combat Reflexes was called revolutionary when it originated on SOG039 Lady Shiva. It’s no less effective here. Her nine range and 11 Attack with Pen/Psy is deadly and the unique damage over time feature for hit targets is great. Sharpshooter means she can make ranged attacks while based with her opponent. 4 clicks of Steal Energy should allow her to get back into the fight when damaged. If all else fails she will least do some damage on the way out with her CULL OBSIDIAN trait. This is not a 100 point dial, but that’s all you will need to pay for it!

3 thoughts on “WE are Groot. (Or a Second Opinion on the Guardians of the Galaxy Comic Heroclix set)”