And this just covers the rosters from their first 30 years. Hickman’s run alone probably doubled that number…

Comics & More in Madison Heights is back in action exactly one week from today! Wednesday, May 27th at 6:15pm, we will be running a game called “Assemble Your Avengers!”

The Rules: Your team must be a 400-point, Golden Age AVENGERS-keyworded Named Themed Team! Avengers ID Cards are legal, but must follow normal ID card rules (and of course you must have the corresponding figure on your sideline).

-Relics, Resources and Bystander/Horde Tokens are NOT allowed as part of your Build UNLESS they are brought into play via a power or Trait possessed by one of your characters (For example, the new Rick Jones Chase figure brings special Bystander tokens into play at the start of the game and when certain conditions are met during the game–that is legal for this game). 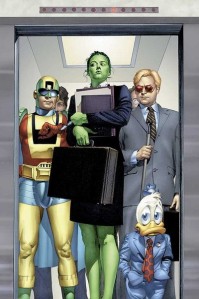 Special Stipulations (aka The Legalese):

-The Avengers Team Base may not be played in this event (for reasons that will become clear in a moment);
-Note that the rules for this game mean that you can still use certain pieces like CW049 Morgan Le Fay if you wish; even though she doesn’t have the Avengers keyword, an Avengers Themed Teams that includes her is still a Themed Team.
-This field DOES include non-carded figures; you can consult resources like the Units section of HCRealms.com to figure out which old figures have the Avengers keyword and which do not (Hint: Rookie Infinity Challenge Black Panther does, Veteran Infinity Challenge Black Panther does not).

There is no specific entry fee per say; all we ask is that you purchase at least 1 Comic Book, Action Figure, Heroclix Booster Pack or Gravity Feed Pack when you get to the store as a thank you to the owner for hosting this event.

-The overall winner will receive an AVX#T001 Avengers Team Base! You may recall that this bad boy was given out exclusively to Avengers players in the last month of AvX!! Well, if you missed out then, are new to the game (or if you just want another one), come on down and win one! But that’s not all! With that Avengers Team Base, the overall winner will also receive the Rare Red Hulk and Common Daredevil from the Deadpool expansion, both of whom work with this very Team Base! All cards are, obviously, included.

-Second Place gets a Rare Shang-Chi figure w/card from the Deadpool expansion!

-The Fellowship Prize is a Fear Itself #021 Dr. Strange w/ card (and one of the few Dr. Strange figs with the Avengers-keyword! What can we say–it’s the Theme of the night!).

So come on out for a fun night of Clix, and continue to check this site for future Comics & More game announcements!

-And for anyone looking for your regularly schedule Critical Missives column, click here for Ninwashui’s take on the best ways to use AVAS037 Manifold!

Also, look for a new article on building armies around each of the new Avengers Assemble Chases coming very soon to the front page!

Until then, Stay Safe, and Watch Where You Draw Your Lines of Fire!