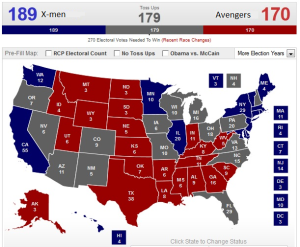 I tried having everyone vote for their favorite, but after having to recount Florida three times I gave up.

With the latest organized play event AVX players have been given a choice of picking the Avengers or X-men starter to base their army around. Which one should you chose? Here’s a detailed breakdown of which one’s better.

Power Level of Available Teammates (outside of the AVX Set):

Top 3 Figures in the AVX Set:

Winner – Xmen. This was really close, but I think the top 3 X-men edge out the top 3 Avengers in AVX organized play. I think all the figures in the set are great for their point cost. The worst of the bunch are Iron Man and Namor. Besides those two, anyone else would be a great addition to a team.

All the Categories not related to Heroclix: