Today’s article is meant to give you ideas when building your next force of  how to add a little versatility. The attributes I’m reviewing today are a great way to have your force adapt to the circumstances of a battle during the battle itself. A way to customize your forces to any given situation. I’ll be covering in this article Alter Ego, Revert, Split/Merge, Resurrection Effects, Battlefield Promotion, and Morph. 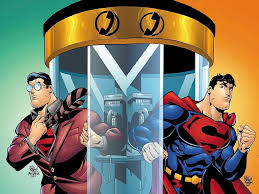 Do you think Clark changes clothes behind the Verizon cart at the mall now that phone booths are out of style?

Alter Egos may bring the least amount of customization to your force, but they are definitely still worth mentioning. The idea is that you get to choose between a (usually) low point civilian guise or change to a super hero of the exact same points. Some characters can have several super hero identities to choose from. But most of the time there are only two options, stay as a civilian or become your one super hero identity. Keep in mind at their low point cost, most of these guys are super for only about three clicks. Some of the Alter Ego pieces are pretty useful as just themselves (like CW010 Donald Blake). Some are just pieces you want to jog around in a circle until they push to their Alter Ego power (like IIM016 Pepper Potts). All of them offer you at least a little mid battle customization. For example, If you are playing CW010 Donald Blake and your main attacker is KOed then you’re going to want Thor to join the battle and you should push Donald to his alter Ego power.

ASM007 Johnny Blaze is a standout in this Category because if an opposing character sheds innocent blood in his presence they will immediately have the Spirit of Vengeance to reckon with. Similarly if you shoot at AVM013 Bruce Banner or IH202 Bruce Banner, it might be the “other guy” who spits out the bullet.

Here’s a listing of all the available Alter Ego figures in Modern:

Revert – AKA From Hero to Zero

Revert is similar to Alter Ego in that it gives you some extra options at the end of a powerful characters dial. Unlike Alter Ego instead of becoming a new character of the same points at the top of (usually short) dial, your usually trading down in points. So When 155 FI020 Red She-Hulk reverts on click 5 she becomes a FI006 Red She-Hulk on click 5 (with an attack and damage bonus due to the trait). Why would you do this? Well usually by the time a character gets to their revert clicks, they past the point of being really useful. There are also bonuses to reverting if you are playing one of “the mighty” or relics that come into play with “The Worthy”. With some characters only have one revert option in modern (Like FI025 Skirn) and some have an incredible amount (like FI030 Spider-Man). You can have veritable army of revert options figures waiting for you to choose from. You should also remember that reverted heroes can work with the duo “merge” power. For example, you could play IIM035 Dreadknight, revert him to CW039 Hawkeye, and combine him with FFCW005 Mockingbird to form CW054 Hawkeye and Mockingbird (likely healing Hawkeye in the process).

130 point SLOSH052 Highfather stands out in this category for being the only figure to revert to a higher point figure (175 point SLOSH051 Takion). FI020 Red She-Hulk and FI018 Iron
Fist both revert into characters that have the ability to heal back up to their top clicks (and keep the nice att/dam bonus). Probably the most versatile figure in this Category is FI031 Wolverine. His revert click is also a stop click with regeneration on it. Meaning that on your next turn you can regenerate and keep that figure in the battle or you can go to any one of his 9 different lower cost figures. You can even decide to revert to a more defensive figure as a free action (like TABM-004 Wolverine) after you fail a regeneration roll with FI031 Wolverine.

Here’s a listing of all the available figures with Revert in Modern: 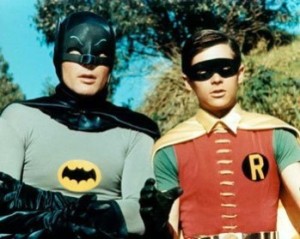 Split/Merge – AKA I’ll be there for you

“Merge” gives you the option of combining two smaller characters into a larger one with possibly a completely different power set. If you merge a damaged character with an undamaged character the new bigger character is undamaged. “Split” makes two smaller characters out of a large duo figure. This allows various combinations that can produce positive game effects for your team. You can split WXM101 Colossus and Kitty Pryde into WXM002 Colossus and WXM003 Shadowcat so that Shadowcat can taxi Colossus into battle. Then after Colossus takes a hit, merge them back into their duo figure for a quick heal. Another example is Splitting a mildly-injured CW059 Thor and Hercules into IH026 Hercules and CW010 Donald Blake and then using Donald Blake’s support to heal Hercules back to full health. The following turn you can merge into a full health duo again.

CW060 Avengers Prime really stands out in this category for being a 1-man-army, or a 3-man-army depending on how you look at it.

Here’s a listing of all the available figures with Split/Merge in Modern:

This category belongs almost exclusively to the past lives of Iron Man and SLOSH049 Solomon Grundy has just recently joined the party. How do you qualify? You need to have the  power to be KOed and come back different then you were before. WXM020 White King doesn’t qualify because he only comes back as the same punching bag he always was. The past life figures are all slightly different for a customizable response to your Opponent. Fighting monsters? Bring IIM054 Iron Slayer (1890s) into the fight. Need stealth? Come back as IIM056 Iron Soldier (1910s). Facing tough defense? Resurrect as IIM053 Iron Paladin (1400 AD). You get the idea.

Here’s a listing of all the available figures with Resurrection Effects in Modern:

Battlefield Promotion – AKA Stabbing Your Way to the Top

“Um, Yeah… I’m going to need you to come in on Saturday.”

The  Tenth Anniversary set introduced the idea of starting with rookie characters and upgrading them to their veteran selves through good game play. It’s an awesome thought to start with an 87 point rookie hulk and through great play (and lucky rolls) end up with a 350 point World Breaker. Some Promotions (like D10A021 Superman) are easier to attain than others (like M10A006 Marvel Girl). And some promotions just aren’t even worth it. I think 100 point D10A019E Martian Manhunter is actually worse than 90 point D10A003 John Jones. Remember that these recently promoted figures could qualify for a duo as well. If you promote 125 point TDW018 Thor into 200 point TDW001 Thor you could combine him with IH026 Hercules to make the 300 point CW059 Thor and Hercules duo (likely healing Thor in the process).

TDW018 Thor is real stand out figures in this category. He can be promoted by a single hit on an opposing character. That a pretty easy 75 point promotion. Similar TDW009 Algrim promotes simply by being hit. If they don’t want to hit him, he’s still really good for the points.

Here’s a listing of all the available figures with Battlefield Promotion in Modern:

Morph – AKA The Masters of Disguise

These are the Cream of the crop when it comes to versatility. Most of them can take another form simply after a move action. Need stealth? Most of these have a stealth version. Close combat? Check. Ranged combat? Check. Their are a Swiss army knife on a dial.

Here’s a listing of all the available figures with Morph in Modern:

So now that I’ve listed all these great units in the article above, you might be wondering how you can use this information. Well, here’s some ideas.

The Easy to Promote Team

Warrior theme team. Algrim taking one hit and Thor landing one hit might be enough to promote both of them into better figures. The “ramming” dark elf soldier makes a great distraction while you’re doing it.

Avengers Theme team. Send Ant Man into the fray. When the opportunity arises go directly to giant man and stomp face. While that’s happening Victoria Hand and Mockingbird should help Hawkeye do as much damage from range as possible. Together they enhance his range +1 and his attack value +2. When Hawkeye takes enough damage to revert, do it and then immediately combine him into CW054 Hawkeye and Mockingbird.

An Army of One… Hundred

If you do play this 26 figure team, I have a word of warning for you. With all the setup, placement, and decision making you’ll need to do to really play this team well it’s likely the game will go to time after only a few rounds. Of course if the person sitting across from you is a brand new first time player, it may only be a one round game before time is called. Then your opponent will likely quit. Quit Heroclix. Quit gaming. Quit Life.