So on 2/11 Comics’n More is having a 1000 Colossal Rampage. I have a family thing that I need to attend and can’t make it. However, I didn’t realize that until I had already designed 3 teams (eh, it happens). So here is what I would have been playing…

The Format: 1000 point Rampage! Oreo Age. (Which includes Superman and any sets which came out later – except for Star trek and Yu! Gi! Oh! Because having Iron Fist knock out the Enterprise is too weird and because Yu! Gi! Oh! has always sucked.) Each team should have a Colossal, if possible. Otherwise, bring your best giant slayers.

My Team (s): (One of which I would have played at the event)

“There Is Nothing to Fear but Fear Itself… and This Team.” (Asgardian Themed Team)

How it works: Greithoth will want to try and hit someone with Invincible or Impervious (like an opposing Colossal) right away so that his trait EXTREME ABSORPTION will let him use that power on all 8 of his clicks. He’s got Running Shot so he has a 9 square attack range. (move 5 shoot 4) If he lands exactly on click 5 you should Revert him to IIM103 Absorbing Man. On click 6 or 7 revert to IIM033 Absorbing Man. Being a giant he is also the taxi that carries Kuurth in battle. Try and picture that in your head.

Kuurth is great against smaller, squishy characters that can be carried. His opening Movement lets him charge 6 squares and still attack. That can surprise some people–especially if Kuurth is running through a wall to do it. If he lands on click or 6 or 7 you can consider Reverting to IIM032 Juggernaut, but Kuurth has a 10 click dial so you may not want to Revert at all.

The Serpent needs to build up Fear Counters as fast as possible. To best way to do this is to use Running Shot along with his printed 3 Bolts to target your opponents weakest pieces 3 at a time. Divide up your 7 damage to do at least 1 to everyone. That’s 3 Fear Counters a turn. It will only take 2 turns of that to build up a enough Fear to take multiple actions every turn. While rolling all those attacks with the Serpent you could roll doubles to activate the Mighty ATA. If you do, then your force will have a serious advantage. You will gain 10 counters which you can use to modify the next 10 attacks against your team by -1. That should be a serious advantage.

[EDITOR’S NOTE: Only a person with a dark, dark soul would even think to play The Mighty ATA during an event like this...] 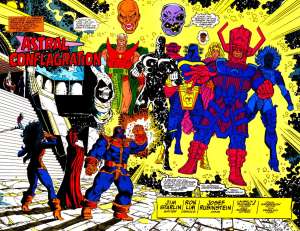 The best game of Hollywood Squares – ever.

How It works: If you’ve ever played (or played against) Ziran the Tester then you know about his (her? its?) TESTING Trait. For those of you who are new to this figure, the TESTING Trait allows you to do up to 6 damage to an opposing force before the game even starts. Thanos brings a lesser version of that with his CHOOSE – THE GAUNTLET OR THE TRIBUTE Trait. Both of these Traits can be used to damage an opposing character like a Colossal without needing to make an attack roll and before the game even starts.

Once the game does start your opponent’s attention should be focused entirely on the 12 range, 13 attack, 6 damage, Psychic Blasting, Multi-Attacking Ziran the Tester. That distraction will let Thanos make the most of his A BLOODY PATH TO FIND MY SON Trait. People largely panned this character when he came out, but I believe they were wrong. At the 200 point level he can lead himself and if he’s not the opponents main target, he can use Outwit to dish out a bunch of damage.

Having given up their dreams of destroying our universe, Shuma Gorath and Dormammu make the natural transition to  gangster rap.

How It works: In a game where you know the other team is most likely going to be centered around a large point character, Shuma Gorath’s EMERGE THROUGH YOUR GREATEST CHAMPION should go a long way towards keeping him healthy and in the game. The last thing you want to face is someone with the Mystics TA that can automatically heal. Do your best to put Shuma within 5 spaces of the enemy team so that you can use Flurry (and later, his Special Incapacitate)

Dr. Strange will use his GATHER THEM: SECRET DEFENDERS OR MIDNIGHT SONS Trait give everyone the Defenders Team Ability. That will let Shuma Gorath share his 19 Defense Value with the rest of your team who (except for Doctor Strange) can add their Energy Shields for a total Defense of 21 against ranged attacks. The team all need to stay adjacent to make this work, so line them up in front of Shuma. Further complicating your opponents attack strategy is the Mystics TA and the fact that your team has 4 Probability Controls!

[EDITOR’S NOTE: Including “No More Mutants” Scarlet Witch in this team is just sick and wrong. You are a troubled, troubled man…]