So we’re always talking about what we’d like to see Wizkids do with their Marvel or DC licenses, but we never talk about the independent stuff they put out, and where we’d like to see them take those properties.

Well, not anymore! Today is all about what we want to see coming down the pike from Wizkids and their non-Marvel, non-DC releases! 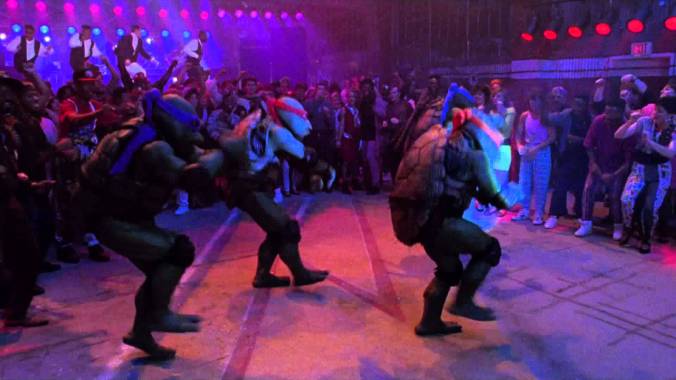 This one is easy. They’ve almost done everything they can with the animated Turtles Clix, and I’m honestly not sure there’s a ton more to be mined from the comics, either.

But they could, like, TOTALLY squeeze two or three sets from the live-action Turtles movies! Who doesn’t want a vintage Vanilla Ice piece with some sort of “Ninja Rap” Damage Special, or a Megan Fox as April O’Neil figure (it would at least have to be better than her Megan Fox as Lilah from Jonah Hex piece, right?)?

Honestly? Probably not good. From what I understand, this might be a bit of a licensing nightmare. It would be a license of several 20-25 year old properties that were themselves licensed products that were capitalizing on the success of an animated series that was itself licensed from an independent comicandnowmybrainhurts!!

Everyone wants original cast movie Clix or TNG clix. That would be fine with me. But I’d love a set that’s focused on all of the “Mirror Universe” characters that have floated in and out of Trek’s continuity!

Whether that means a whole set of Alternate Reality pieces (sort of a Star Trek version of the What If… ? or Elseworlds sets we just got) from throughout Trek’s history, or just a DS9 set with a “Mirror” Sub-Theme, those are the pieces that would have me reserving a Brick at my FLGS.

It’s not impossible, but it’s probably years away. If Star Trek: Away Team sells well, we’ll probably see two or three more sets focused on the Original Cast and the TNG folks before they’d really consider making any DS9 characters (and with them, the DS9 “Mirror” characters).

Still, the fact that the Mirror folks have their own Team Ability is a good sign…

Undead was fun, but I want to see the full return of the Horrorclix brand!! I actually think they had the right idea when they started of mixing original properties with specially curated licensed releases, all under the Horroclix name.

Imagine a Horrorclix Buffy set, all designed with modern rules in mind, all Modern Age tournament legal. Or a re-release of a Colossal Cthulu, followed by Gravity Feed set of more Dead Presidents (like Zombie Lincoln).

This would be a great way for Wizkids to hit up popular licensed properties without having to commit to more than one or two sets at a time!

The possibilities are endless!

Pretty dubious. I think Wizkids has become much more cautious when it comes to licensing other properties for Heroclix (which, by the way, isn’t necessarily a bad thing). That said, the idea of, say, going to Target to buy an Alien Queen sort of Raid Scenario for two or more players sounds like a lot of fun to me. But first we need to see if we’ll even be getting more Undead pieces!

Okay, that’s all for now folks! Come back and see us tomorrow, when we’ll talk about what properties Wizkids has never Clix’d but should seriously consider. Until then, Merry Christmas and Happy Holidays!