Welcome back! It’s Night Six of The Twelve Nights of Clix-Mas, and we’re continuing yesterday’s Irresponsible Speculation by pondering which non-Marvel, non-DC licensed properties out there would make a great Heroclix expansion!

As always, we’ll start with the obvious… 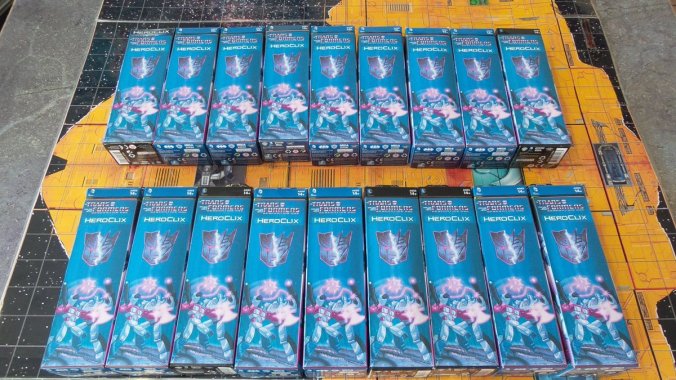 A Heroclix set based on the 80’s cartoon and toy line would kick serious butt. It would also tick all the boxes on the unofficial “Heroclix Licensed Property Checklist.”

–Property with large awareness and appeal to target audience;

–Long roster of BOTH heroes and villains from which to pull figures from;

–Plenty of characters with powers/abilities that would be easily adapted to the Heroclix format;

In fact, this is such a no-brainer THAT IT’S ALREADY BEEN DONE... sort of!

An amateur creator going by the handle “geekgirl137” actually created a whole Transformers Heroclix set and sent two bricks of it to the folks at HyperRPG’s “Indomitable” show! Check it out!

I’m inclined to say no, for three reasons.

First, I have no idea how much the Transformers license would be, but I’m guessing it might cost more than some of the other licensed properties out there. Also, part of the core business of Transformers is selling action figures, which isn’t in the same category as Heroclix, but isn’t that different at the end of the day.

Also, from a design standpoint, virtually every piece in the set would have the Robot keyword, which could technically lead to Themed Teams of figures that have no business being Themed together.

Finally, these characters are, for the most part, giant robots. Dramatizing that as an actual 3D sculpt that doesn’t look ridiculous next to normal Marvel and DC Clix yet still fits in a Gravity Feed or five figure Booster Pack is definitely going to be a logistical challenge.

The G.I. Joe universe is practically as close as one can get to Marvel or DC without actually being them. Plenty of great, colorful heroes and villains to bring into Heroclix, all with distinct abilities (read: power sets), iconic costumes and cool codenames. Duke, Flint, Gung Ho, Snake Eyes, Quick Kick, Scarlet, The Baroness, Destro, Cobra Commander… this set practically designs itself!

Look, we’ve gotten the Turtles already. One could argue that this would be the next logical step! While I doubt there’s anything in the works, I could definitely see this happening at some point.

Because it’s a hot, modern property!

Stranger Things doesn’t have the breadth of content that the previous two entries on this list have, but it certainly has enough to fill out, say, an 18 piece Gravity Feed set and a Starter.

If nothing else, this set would give us a great Map or two!

This would be really out of the box thinking. The folks in charge of Stranger Things have been licensing the bejeezus out of the property recently, but I don’t think this would interest Wizkids. Usually, when we see an unexpected property adapted in Heroclix, it’s a film (Kick-Ass 2, Pacific Rim), not a television series. Star Trek: Away Team is kind of an outlier in this regard.

Agree? Disagree? What properties would YOU like to see adapted by Wizkids? And would you like to see an expanded version of this article at a future date? Sound off in the comments below.

And don’t forget to come back tomorrow for more Clix-Mas goodness!!

2 thoughts on “The Ghost of Christmas Future Is Back for More Irresponsible Speculation!! (Or, The Sixth Night of Clix-Mas 2017!!)”